Shopping in the past: the war eras

When talking about shopping during war time, rationing is normally the first thing that comes to mind. Rationing dictated the way we shopped in World War II, but was also in practice by the end of World War I, having started in early 1918. From 1915, prices for basic goods such as food had sky rocketed. There were often shortages and cases of stock piling with no controls over purchasing, which led to the Food Control Committee (FCC) and ration cards. Ration cards were tied to a particular retailer and could only be transferred to another shop once they had run out of stock or if the FCC felt the shop had too many customers.

During the 1920s and 1930s, the need for shopping sprees came and went in waves, changing with the social and economic circumstances of the times. For some, the Roaring Twenties presented a time to celebrate and shop. The war had ended and the world was changing, with social norms starting to be redefined and demand for a whole new style for the home, wardrobe and social engagements, with plentiful trips to fashionable stores. For others hit harder by the aftermath of World War I and later the Great Depression, shopping remained a painful necessity with prices high and money scarce. After the Depression in the 1930s, shops saw a rise in the sale of branded products and confectionery shops, like Abraham's Sweet Shop at Milestones Museum, became increasingly popular as disposable income started to rise. This rise, however, was short lived as the country would soon be thrown back into war and see the return of even stricter rationing.

With all resources in manufacturing and production design once again turned to supporting the war effort, shopping was just for basic needs, with shopkeepers working under strict laws. Customer service became very personal and shopping was local to home. Under the famous motto "make-do-and-mend", wartime Britain was recycling and not buying new. Mass production of certain goods such as clothing was refined during the World War II under the Utility Scheme. Manufacturers were only given material if they produced a percentage of utility stock and only the companies that achieved the high standards set by the scheme remained in business. For clothing in particular, this set the tone for better production methods as well as well-made, longer-lasting clothes and goods for sale after the war ended.

Access to stock was in many cases harder after World War II than during it and rationing remained in place for many years. Although fashions, the variety of products on offer and the recreational pastime of shopping were changing across the sea in America, in the UK the way we shopped remained very much the same. But with the 1960s looming, change was on the way... 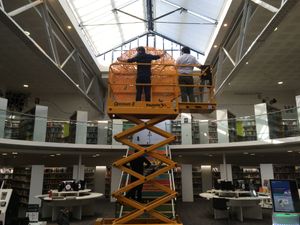 Arts Insider: an interview with Provincials