On The Move – Delivering the goods...

On the Move is a Hampshire Cultural Trust project, funded by the Esme Fairbairn Collections Fund, which focuses on making collections accessible for wellbeing.

During lockdown, we’ve made some changes to how we run the project as we have been unable to spend time physically with the collection. We have taken it online and are working with our fantastic team of volunteers to research and bring to life the stories connected to these objects.

As you walk through the gates of Taskers yard at Milestones and round the corner into Anna Valley Place, you will spot two men unloading a table from a wooden box on wheels. This vehicle is known as a pantechnicon, a word that we don’t use much today, but came into use in the 1830s thanks to a man called Seth Smith.

Smith coined the term when he designed a Greek Portico style building in Motcomb Street, Belgravia, London, for a bazaar and department store for the sale of carriages and household furniture. Coming from the Greek Pan meaning all and Tekhnikon meaning of the arts the word fit Smith’s idea perfectly. However, his Bazaar didn’t succeed and he was forced to think of another way of using the space. The result was a storage facility for wealthy Londoners to use when leaving Town for their country homes; storing their valuable furniture in what Smith claimed to be a fireproof building. Sadly in 1874, a fire ravaged the building, destroying hundreds of thousands of pounds worth of goods stored inside. Only the façade survived and a new building built behind it. It still stands today and, in 2020, opened as a space for Nordic and Japanese design and craftsmanship, as well as cafes and restaurants.

Until the early nineteenth century, furniture removals were usually carried out using a horse and flatbed cart. Loading of heavy items was difficult due to the high platform level coupled with poor weather protection and security of the goods in transit. To transport the goods to the Pantechnicon in Belgravia, Smith designed a special removal vehicle which, in 1830, revolutionised the removal process.

His Pantechnicon had a lower floor with a loading ramp at the rear to facilitate easier loading. Weather protection and security were provided by a light box body enclosing the load, protection of the goods inside the box body was provided by spring suspension, the interior held timber tie-rails for furniture to be secured, and the wooden wheels are rimmed with iron to prolong their life with large wheels at the back and smaller at the front improving maneuverability on urban roads. Built initially on a normal horse drawn wagon chassis, the box was later made detachable, able to be lifted onto railway flat wagons for long distance transport; an early example of containerisation. This resulted in the birth of the British Association of Removers, which was set up to enable cooperation between hauliers and streamline the use of multiple forms of transport in the haulage business.

Smith’s removal vans were regularly seen around London and with the name of his business on the side, people began to refer to the vehicles as pantechnicons. The word has dropped out of use in the UK, however in Australia they still use it today, shortening it to pantech.

We don’t know a huge amount about our pantechnicon. We know from the signage that it belonged to Sid Ansell of Camberwell, who ran a successful removal and haulage business and later hired out motor cars and coaches for special events. It has all the features of Smith’s design, however we’re not sure who built it. It has been conserved in its current condition, but looking closely at the paint work it would have been eye catching on the roads with a blue and white paint scheme and yellow lettering.

Next time you’re at Milestones, have a look at this vehicle and think about how Seth Smith’s invention changed the way people moved their possessions around the country.

Click here for more information about On The Move. 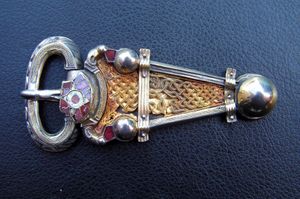 Local History Mystery: How ‘dark’ were the Dark Ages? 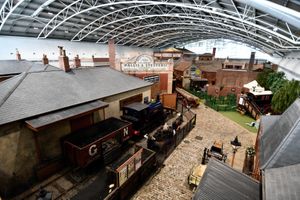