In a three part serialisation, Hampshire Wardrobe's Havva Buckles discusses women wearing clothing originally designed for men from the 19th century to wartime Britain and beyond. You can read part one here.

Fifty years later, however, we saw the opposite happen. Instead of fighting to wear controversial clothing and draw attention to themselves, which would be counter intuitive to their cause, the suffragettes and members of the Women’s Social and Political Union Party kept their style overtly feminine and ladylike. Avoiding any eccentricity or mannish dress, they could hide in plain sight, launching their protests and marches as a surprise attack by elegantly dressed ladies in plumed hats and corseted waists.

By the time we reach the start of WWI, fashions had started changing again. Having already shed the constricting clothes of the Edwardian style that was full of tiny buttons, lacing and frills, women abandoned corsets and petticoats to don more practical separates. Blouses, knitwear and skirts with shorter hemlines brought about freer movement to work in factories and nurse the sick and wounded. As during most wars, women’s fashions changed and adapted, a pattern of shorter hems and muting of colours emerged, but the between war years brought some more changes. Women were freer (despite not yet having the right to vote) through working and earning their own income and gaining confidence and new skills learned whilst men were at war. Once the war was over and the 1920s were in full swing with tans, sports and travel being fashionable, it became tolerable for women to wear jodhpurs, plus fours and knickerbockers for their sporting pursuits!

However, many young women adopted the more masculine appearance at weekends allowing them to fit in with the boyish style of the drop-waisted look of the 1920s.

This inspired fashion houses and a new wave of designers such as Coco Channel - with her young, sporty sense of style - came on the scene. Out went skirts, restrictive underwear and over-the-top headwear and in came streamlined trousers, boat neck tops and key pieces of accessories.

Fashion and film went hand in hand and the emergence of silent movies gave young women the chance to emulate the grace and glamour of movie stars from the '20s and '30s. In order for trousers and more masculine clothing to be accepted in society, it was at this point that women needed to claim them as their own. The pyjama or beach style satin palazzo trouser came into fashion in slinky, feminine fabrics such as satin, crepe and silk.

It was during this time that celebrity culture started to catch on and many women emulated their favourite starlets by copying their hair or fashion style. Marlene Dietrich’s transgressive wardrobe brought menswear inspired fashion to the forefront. Dietrich’s style and love of a well-cut tuxedo suit inspired Yves Saint Laurent’s now infamous and well-coveted Le Smoking women’s tuxedo suit.

Both Dietrich and Katherine Hepburn started to break the barriers of society's perception of women wearing men’s clothing, yet women still hadn’t been liberated from the practicalities that WWII was about to offer them. In fact, in smaller towns and cities, women could still be arrested for masquerading as men if caught wearing trousers! But by the end of the 1930s things had changed. Vogue illustrated a woman in a pair of trousers on their front cover and WWII began, causing a seismic shift for women. Women’s fashion took on a more masculine style, influenced by the structure of the military uniforms, with strong shoulders (and the invention of shoulder pads!) and streamlined tailoring. 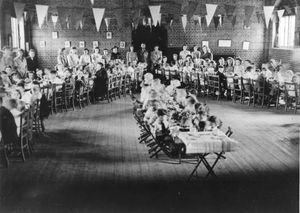