Conversation with Conservators: All about the objects (Part 2)

Last time we introduced you to our three conservators. This week, project officer Alex asks the team about the objects they’ve worked on and how it feels to work with these special items.

ALEX: What has been the most interesting object you’ve worked on and why?

NIGEL: Oh that’s tricky. So hard to single one out…

CLAIRE: I can’t remember everything I’ve worked on without going back through all my records!

RUTH: One of my most interesting objects was the shaman’s cloak.

RUTH: [It] was from the Yoruba tribe in West Africa, it was interesting because it came from a background that I had very little knowledge of. It also came with a certain smell of herbs.
From my point of view it was imbued with all the magic and beliefs of that tribe and had to be handled with respect of those beliefs.

NIGEL: I’m not sure I’ve got one. I work on so many different objects, from the windmill, steam engines, Internal Combustion propelled vehicles. I enjoy every second I spend working on all of them.

ALEX: You can have a few objects if you like. What makes them so enjoyable to work on?

NIGEL: Can mine be my steam roller? It was pretty challenging. Definitely beautiful, lots of local history and a total wreck when I got it…

CLAIRE: Some of the most incredible to work on are also the scariest. Cricket cage! Wedding Cake! Err…

ALEX: What makes them so scary?

CLAIRE: Often objects are in a really bad way because of being particularly complex or delicate in the first place. Some are inherently unstable. Which makes them scary and a bit of a risk to work on as you’re afraid of causing further damage, but, maximum job satisfaction if you can put back some of its strength and ability to be enjoyed again!

ALEX: Ruth and Nigel, would you agree with this?

CLAIRE: I think the public appeal often lies with the pretty things, the glamorous or rare objects, which might not actually have taken much work to put right.  But it’s the work that doesn’t get seen that is often the most enjoyable and necessary to do.

CLAIRE: Often it’s quite difficult to share that bit, just plugging away at a mundane object!

ALEX: Nigel you told me previously that many people think that the historic vehicles are robust, when in fact they’re quite fragile. Do any of you have an example of an item you’ve worked on that people believed could be conserved quickly because it seemed robust?

RUTH: [Mr Simpson’s] Teddy Bears! Even the modern ones have a certain amount of fragility.

CLAIRE: Judgements can sometimes be made too quickly about how long things should take, before objects have been investigated or problems diagnosed.

RUTH: I’m often asked how long the teddies will take, since I’ve not seen them all I can’t say.

ALEX: I suppose it’s like being a doctor trying to make a diagnosis without doing the necessary tests?

RUTH: Or building a building without the plans!

NIGEL: The vehicles are complex objects and very vulnerable. The necessity to keep them operational poses lots of ethical questions and it’s a tricky balancing act keeping them as original as possible. Past treatments can very often cause concern.

ALEX: This does actually lead quite nicely to a very loaded question: What is the difference between conservation and restoration?

Join us next time as we delve deep into a discussion about conservation, restoration and preservation... 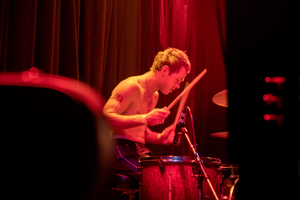 The Legend of Westival