A VJ Day 75 story: Postcards home from a Farnborough prisoner of war in Taiwan

During World War II, Gunner Lawrence Randall from Cove near Farnborough, served with the Royal Artillery’s 5th Searchlight Regiment, stationed in Singapore. In 1942, at around the age of 19, he was captured by the Japanese forces.

Lawrence was sent to Taiwan with hundreds of other British Prisoners of War (POWs). He was first incarcerated in Taichu Camp where they were put to work digging a flood diversion channel through the rock. This was a labour intensive job, working under the hot sun with nothing more than hand tools and baskets to carry away the rubble. In total 29 soldiers died constructing this channel.

Lawrence’s time at this camp was not to last. Following a heavy monsoon storm the camp was badly damaged. In mid-1944, the camp was closed and the POWs were sent to other camps on the island. Lawrence was moved to Heito camp in the south of Taiwan where the POWs worked clearing the land to grow sugar cane.

It was during his time incarcerated on Taiwan that he was allowed to send letters home to his family in Farnborough. Although only a few allotted sentences were allowed, you can still imagine the mix of relief and anxiety his family must have felt to hear from him for the first time in over a year. Perhaps the most touching postcard is the final in the series where he is able to write his message in his own hand, address it directly to his mother and sign it simply ‘Len’. All though the message is still proscribed, it adds a personal touch.

In March 1945, he was sent to Fukuoka camp #24 near mainland Japan where he worked in the Sumitomo coal mine until the end of the war. On the 16th August 1945, the day after Japan’s surrender, the prisoners were told that their ordeal was finally over. They were asked to write ‘PW’ on the roofs of their huts so that American bombers could drop food supplies to them. Allied forces arrived in the Fukuoka camp around 5 weeks later in September 1945. Weakened from starvation Lawrence made his long journey home via Australia and the USA.

These postcards are now part of the museum collection cared for by Hampshire Cultural Trust helping to preserve the memory of Lawrence Randall’s experiences and others like him who served in the East. 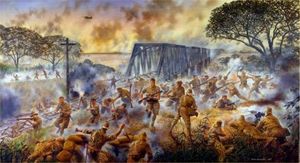 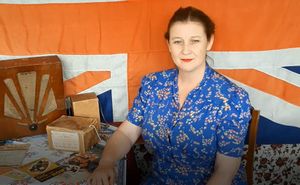