A VJ Day 75 story from Milestones Museum's costumed volunteer, David P. Whithorn. David discusses his Great-Uncle Donald and the role he played in World War II at the Battle of Sittang Bridge.

This is a photograph of my Great-Uncle ‘Donald’ or, more correctly, 4613797, Pte Donald Carson Young, ‘C’ Company, 2nd Battalion, Duke of Wellington’s (West Riding) Regiment. He was born in 1917, the same year that his father was serving in the trenches of the Western Front.

Donald grew up in the peace that was to follow, with a passionate interest in India. In the 1930’s, he joined up into his father’s regiment and went out to serve in India. All was well, until the World War II began and the Indian Army was rushed into Burma to try and halt the Japanese invasion.

I knew little more about him, until by chance, I came across this picture commissioned for the Duke of Wellington’s Regimental museum in Halifax.

The photo was entitled ‘C’ Coy, 2ndBn, Dukes of Wellington’s at the Battle of Sittang Bridge, February 1942’. Now that started the bells clanging... Heavens, one of these men in this picture was Uncle Donald!

I looked into this more, it seems ‘C’ Company was holding the bridge and defending the bridgehead across the Sittang River...when the RAF (in the picture too) flew down the river and bombed this bridge, destroying it... But with ‘C’ Company on the WRONG side of it. The company fought off the Japanese forces and those that could swam back across it as best they could – those that could not swim were helped by those that could but many still were lost. The men that made it, again took a defensive position holding back the Japanese. The '2nd Dukes'  now undertook a fighting retreat through the Burmese jungle.

At one point in late March 1942, what was left of the '2nd Dukes' had been badly mauled and were forced to divide. The wounded were taken back by their comrades; the others would remain to take a final stand to protect the troops getting back. It is known that Donald was still with them – indeed he was one of those who made that final stand. He wrote on the back of an envelope and gave it to a wounded friend being taken back, on it is written in pencil, ‘Tell the family I’m alright’. He wasn’t of course and Donald was reported as ‘Missing in Action’. Technically, he still is – but the Commonwealth War Grave Commission gave him a date of death of 29th March 1942, he has no grave but his name is commemorated on the Rangoon War Memorial – no one in the family has seen it. He was only 25 when he died but he is still my mother’s favourite uncle. At least he missed the dreadful Burmese Prisoner of War camps.

You might have thought this was an end but my stories do not tend to end like this.

Several years ago, I was selling poppies in Festival Place, Basingstoke – as usual in WWI ‘Tommy’ kit. Up came an old couple to buy a poppy. On his lapel was a small badge to denote he was a member of the ‘Burma Star’ Association.

‘You were in Burma?’, I asked. Pleased to see someone recognised his badge he replied, ‘Yes, I was with the RAF.’ ‘I had an Great-uncle with the Duke of Wellington’s who was killed in Burma in 1942 ’, I went on. The old man’s face darkened...’Was he at Sittang Bridge?’ ‘Yes, I replied’. The man broke down in tears, his wife was as shocked as I. The old man said, ‘They told us, the bridge was clear, it wasn’t till later we found out we had trapped men on the wrong side of it, they told us it was clear... I’ve lived with that guilt ever since’ .

Despite the many people shopping in Basingstoke on that day, for the three of us there, we were alone. This man, after all these years, had finally met someone who knew this forgotten story and understood – someone who could then put down his box of poppies, take this man’s hand, shake it, give him a hug and just say, ‘Thank-you!’

The Second World War in Japan ended 75 years ago. The voices of those who were there and fought the Japanese forces are now nearly silent, but the words used by those men of the Burma Star Association who fought, fell and suffered as prisoners of war will always live on...‘We may forgive, but we will never forget!’

Today, may we too not forget... 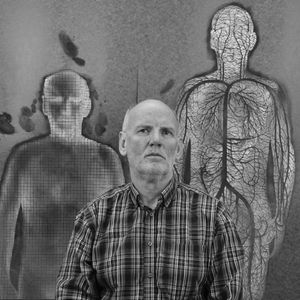 An interview with artist Andrew Carnie 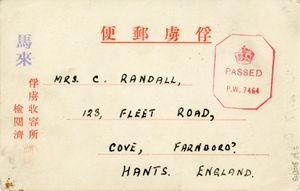 A VJ Day 75 story: Postcards home from a Farnborough prisoner of war in Taiwan