All over Aldershot, Victory street parties were held, the first as early as the day after VE Day. Over the next few weeks almost every street had its party. The biggest was that in the West End, at which 350 children were entertained to a tea of sandwiches, jam tarts, jelly and blancmange, which was followed by the distribution of sweets, oranges and ice-creams. After tea were children’s sports, singing contests, pony rides and clowns. In the evening the parents continued the celebrations with games, community singing and dancing to “amplified gramophone music”. Not all parties were so big, some smaller individual street parties had around 40 children, while the majority had between 50 and 150. However, they all followed a similar pattern of a grand tea for the children, some organised entertainment and then dancing in the evening for the adults, either to records or to local dance bands. Despite the wartime hardships and shortages, the party organisers, mainly women, made heroic efforts to give the children a real treat with many delicious offerings on the tables. The Mayor of Aldershot, Alderman J W White, attended every party. At the Northbrook Road party on Saturday 26 May, he noted that this was the twenty-first party he had attended in a fortnight. The official visitors also gave practical help, for at the same party it was reported that the Mayoress took off her chain of office to help in the kitchen with the washing-up.

Among the most welcome guests greeted by the Mayor at some of the parties were ex-prisoners of war who had returned to their homes after liberation. The town gave these men a formal welcome home on Thursday 14 May, with a dinner organised by the Trades Council at Darracott’s Restaurant (which was on the corner of Union Street and Grosvenor Road). At the dinner, the indefatigable Mayor expressed the town’s appreciation for the men’s service and hoped that they would all soon be restored to full health after their ordeals. Following the meal the men were guests at the Ritz Cinema, where they were welcomed from the stage by the manager who remembered the courage and fortitude of the men in captivity, and hoped that their spirit would be an example to all. 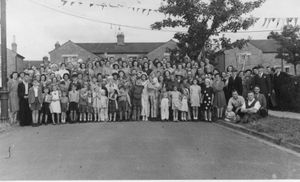