This beautiful carte-de-visite photograph (below) is of Henry Moody and was taken during the mid-1860s while he was the curator of Winchester’s museum. At that time, the city's museum was situated on Jewry Street. It had been first established, and paid for with public subscription, in the Hyde Abbey Schoolroom in 1847. In 1851, after responsibility for the museum was taken over by the City Corporation, it was relocated to Jewry Street. In the early-1870s, the museum then moved into the new Guildhall on the Broadway, where it was given purpose-built space to display its collection. In 1898, it then left the Guildhall for the Westgate, where it remained until the purpose-built museum in The Square opened in 1903. The museum has been at its address in The Square ever since.

Henry Moody was involved in the museum from its infancy and it is perhaps no coincidence that Hyde Street was the first place the museum called home. From at least 1851, Moody and his family lived at 48 Hyde Street. On the 1841 census, Moody and his wife, Mary Brown, are shown as living with their eldest son Henry (b. 1840) on the High Street. Their family was added to thrice more in the 1840s—Walter (b. 1842), Mary (b. 1844), and Fanny (b. 1846)—and it is likely that the expansion of their family necessitated their move out of the centre of town. Their last child, Helen, was born in 1850, likely at the Hyde Street residence. It is on the 1851 census that we learn the role that Moody took at the museum. Under occupation, he is proudly listed as the museum’s curator.

By the 1860s, the Moody sons had moved on, but Henry and Mary’s daughters were still living in the family home above the museum. The young Henry appears to have pursued a career in Winchester as a printer pressman—an occupation that his own father held in 1841. Walter moved to Southampton to become a painter compositor but, by the 1870s, he had become a newspaper reporter. The family were still living above the museum in 1871, but by that time, their youngest daughter, Helen, had moved out. That year, she could be found in Wareham, Dorset, working as a governess for the Mackenzie family. It is likely that Helen returned to Winchester that same year, as it was in the summer of 1871 that her father, and Winchester City Museum’s first curator, passed away.

After the death of Henry Moody, his widow, Mary, went back to Hyde Street. There, she set up home with Helen, eight doors down from the property the family had lived in during the 1850s. The elder Moody sisters, Mary and Fanny, pursued careers outside of Winchester in the years after their father’s death. By 1891 and 1901 respectively though, both women were back in the city. Fanny had settled in Parchment Street as a newsagent and confectioner, while her elder sister could be found living with her aunt in Hyde Abbey Road. By 1911, though, Mary had joined Fanny in Parchment Street and, though she is listed as living on her own means, probably helped Fanny out in the shop from time to time.

It is what becomes of Helen that is most interesting, though. It is probable that she returned to Winchester for her father’s funeral and simply never left. In the 1880s, Helen is listed as a private governess and was probably doing day-work in houses around the area. By 1891, however, she had turned her hand to something else entirely. Her occupation was listed as the “Curatrix of Museum.” Presumably, this was the City Museum, which by this time was in the new Winchester Guildhall.

Although she did not end her days as the curator like her father, she still took up his mantle for a brief tenure and became a custodian of the city’s history. It makes sense for it to have been Helen, too. She was six months old when the family moved into the Jewry Street museum. She would have learned how to walk there, said her first words there, and made many of her first happy memories there. It was a poetic end to the story of the Moodys and the city's museum. 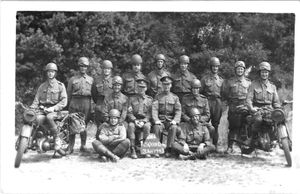 A Berlin Butterfly brought back to Aldershot 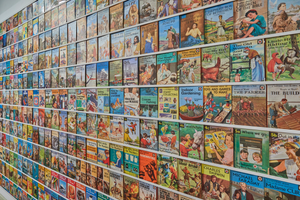 Exhibition Spotlight: The Wonderful World of the Ladybird Book Artists