A Berlin Butterfly brought back to Aldershot

This is the story of a young man from Aldershot and a souvenir he brought back to the town at the end of the Second World War.

During the war, Elyard (Jim) Pavey of Aldershot served three years in the Royal Hampshire Regiment before transferring to the Corps of Military Police, 241 Squad, in 1943, first as Lance Corporal and later as Corporal.

As the Allies advanced across Europe after D-Day, Jim’s squad found themselves first in Belgium and at the end of the war, in the autumn of 1945, in occupied Berlin. After about eight months serving in the British Sector of the ruined city, with ‘the highest standard of integrity, loyalty and efficiency’, Jim finally returned to England in July 1946, bringing with him a souvenir of his time in Berlin, a butterfly plaque, signed on the back by many of his comrades in the Military Police.

The Berlin Butterfly plaque measures 23cm square and is made of plywood. It is just one of many made by the people of Berlin in the days following the end of the war; as it notes on the front of the plaque; ‘In Memory of Summer 1945. Made of the rubbish of the ruins of Berlin’. This example features Pyramis atalanta, the Red Admiral butterfly, and was handcrafted by Curt Panzer & Co, Charlottenburg, Berlin. Other plaques feature different butterflies spotted in Berlin that summer.

It is moving to read the typed label on the back of the plaque, which relates the story of the butterfly plaques; a tale of hope springing from the ruins.

‘When the battle of Berlin was over, they met again, just a small group of friends: some painters, designers and a woman well acquainted with all kinds of fancy-work.

They looked around and none of them said a word. What should they say, what did they feel, facing the dead under blooming lilacs and smouldering ruins of their beloved town? With the churches burnt out and their old windows beautifully coloured gone to pieces, the bridges fallen down into the river, the rails bent and the trees burst, and with mountains of rubbish barring the streets once so full of life. What should they do looking at a chaos like this that seemed to have put to an end at last to a long but wrong way?

Life must go on. It broke the silence. One of them said, they ought to make something of the rubbish that was left. But what?

This is the story of these butterflies; they were made during the summer 1945 in Berlin, piece after piece, by the clever and patient hands of men and women, who had no paints and brushes to work with and no canvas or paper to work on, but were ready to do most everything. Thus the light blue colour of this butterfly is made from the tiles of a fine delicatessen store on "Potsdamer Platz" and the red brown from the bricks of an old building of "Wilhelmstrasse".

These butterflies are no precious work of art. But those who made them believe that they are right to say: nothing is so ugly that it would be impossible to make something good of it. And they sincerely hope that every one of these butterflies coming from the ruins of Berlin into the world will have a friendly reception wherever it may go to.  For it wants to tell that there are many Germans who will do their best to make good for the terrible and shameful events of the past.

Such is the message you will bring home taking with you this butterfly number C650 a true imitation of "pyrameis atalanta" that you may have seen in the gardens and parks of Berlin - in memory of summer 1945.’

On his return to England, Jim lived a large part of his life in and around the Aldershot area. The plaque remained with Jim until his death in 1997, and has been kindly donated  by his daughter to the Hampshire collection, cared for by Hampshire Cultural Trust. The trust are hoping to display the plaque in Aldershot Military Museum for visitors to see when the venue reopens. 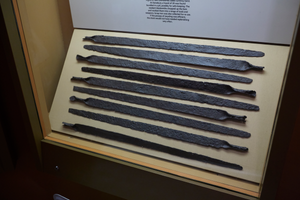