As the nation marks National Beer Day, we take a dive into the history of public houses.

It is thought that the very first drinking establishments were Italian wine bars which have been around for a staggering 2000 years, give or take! Invading Romans brought these “Tabernae” to Britain, building them next to Roman roads to serve passing thirsty troops.

Then, we move on to Anglo-Saxon alehouses - so popular in fact that Anglo Saxon King Edgar even introduced laws to limit the number of establishments in each village. He is supposed to have even made a law called the peg, which reduced the amount of alcohol a drinker could consume. This is where the phrase “taking someone down a peg” comes from!

Pubs get a mention in Chaucers Canterbury Tales and were important centres for recruitment to the English army. The Ye Olde Trip to Jerusalem in Nottingham is one such place, crucial in gathering men to crusade to the Holy land under Richard I, and amazingly, it is still open today! Officially the pub name was coined during the reign of Henry VII.

Beer and brewing had always been a key part of the British diet as it was often safer than drinking the water - but it was not until the early 19th century that pubs, as we know them today, first began to appear.

Now pubs are such a huge part of our culture, it's said that one in five adults in the UK will meet their future spouse in a pub!

So, with that being said, why not pop in for a pint at Milestones Museum’s very own pub, The Baverstock Arms*? The pub is named after Alton-born James Baverstock, a brewer and inventor who was reputedly the first person to make use of a hydrometer in the brewing process. Located on Jubilee Street, the pub is open at lunchtimes and serves teas, coffees, soft drinks and beer. And you never know - you may even meet someone important!

If you love beer, Ashcroft Arts Centre's Ale Festival (13 August) is back by popular demand – and for the first time, we are bringing you some of the best beers, ciders, food and live music that the south has to offer in the summer!

This article was written by Alex Moore, Visitor and Learning Experience Duty Manager of Milestones Museum and Basing House.

A mural to marvel at! 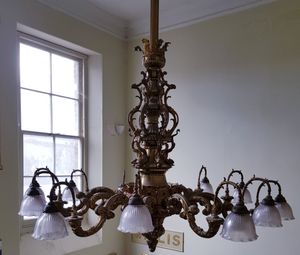