Usually at Milestones Museum we welcome lots of families through our doors to spend Valentine’s Day with us and share the love of learning! This year is a bit different, but we can still learn something new together this Valentine's Day.

So, we thought we should find out a bit more about today's patron saint, St Valentine, what he did and why he has a day all to himself?

Despite speculation, St Valentine was thought to have died in 270 AD near Rome. It’s believed he was beheaded on the orders of Emperor Claudius II for helping Christians to marry, or as other sources state, marrying couples to spare men from service in war. This work to Christianity got him recognised hundreds of years later (having died a martyr's death) and made into a saint. The Catholic Church has many saints who all have unique stories where they help Christians, and suffer martyrdom, a bit grisly for traditional Valentine's Day!

As a figure, St Valentine was very popular and there are lots of stories and conflicting facts about him. It got so confusing that in 1969, the Papacy officially ended veneration (official worship) of him, but he is still on the list of saints because people love him so much! There is also a theory that the celebrated medieval author Geoffrey Chaucer, invented the St Valentine feast day in his poem Parliament of Foules.

His shrine is in the Basilica of Santa Maria in Cosmedin, Rome. You can go and pray to the skull believed to be his holy remains, preserved in a reliquary to encourage miracles for those who visit.

The Vatican teaches that saints are responsible for copious admin in the afterlife and St. Valentine is no exception! He is in charge of lovers (as you would expect), but strangely also beekeeping, epilepsy, plagues, fainting and travelling! So, if you are not a fan of the special day already, celebrate it instead with some honey, make a bee house, but maybe leave travelling until our own plague has moved on!

The Joy of Where we Live - Exhibition online 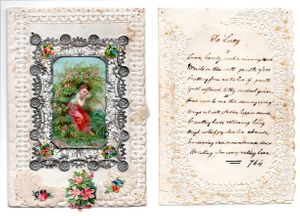