On the Move...Delivered by Hand

On the Move is a Hampshire Cultural Trust project funded by the Esme Fairbairn Collections Fund, which focuses on making collections accessible for wellbeing. Over the past eight months, our fantastic team of volunteers has been researching our transport collection, bringing their stories to life.

This time, we explored the story of this handcart, which is a familiar site for visitors to Milestones Museum, but which also has a fascinating story of restoration and links to an important Hampshire resident.

This handcart came in to our collection in the late 1980s as a gift from Sir Robin McAlpine, whose name may ring a bell: that’s because Sir Robin was the head of the successful Sir Robert McAlpine construction company, which is still going strong today 150 years on! Probably most well-known for the Art Deco style Firestone Factory on the Great West Road in London, he was also a significant player in the Mulberry Project during WWII, designed to create artificial harbours in just 24 hours after the beaches were secured during the invasion of France. Outside his engineering projects, Sir Robin was also a successful racehorse breeder and lived in a beautiful country estate near Alton from 1948 until his death in 1993, at the age of 87.

When the cart, which was built in 1933, was donated by Sir Robin, it had been converted into a playhouse for his children and grandchildren. However, he believed it to have originally been a covered Co-op handcart.

This was just the type of object that would be perfect for display in Milestones Museum, which was in its development stage in the early 1990s. So, the cart went through a restoration project led by a former head of conservation, Mark Holloway. It was during this project that its true history was revealed. Mark writes:

“I was asked to undertake the restoration and when I started to examine the overpaint it was obvious that there was enough of the original paintwork to extract the clues to the colours and signwriting. At this point I still was under the assumption that it would say Co-op somewhere.

"I carefully removed all of the overpaint which revealed… This was not a Co-op handcart but a bakers delivery cart belonging to Hemmings [and] the cart maker's name was uncovered.”

Through careful restoration work, Mark was able to return the cart to how it once looked, inserting new panels where the windows had been, building a new lower frame and importantly, tracing off the original signwriting, ready for sign writer Martin West, who lived in Old Basing at the time, to recreate by hand.

The result is a beautiful recreation of an original 1930s hand delivery cart belonging to Hemmings, a bakery chain with 230 stores across London and a large factory at Chadwell Heath (built in the 1930s). These types of cart were a common sight in the first half of the 20th century, providing local delivery of fresh produce - something which seems very relevant at this time when we’re relying on doorstep deliveries!

Next time you’re at Milestones, be sure to take a moment to look at the Hemmings handcart and think about the work involved to bring it back to life. 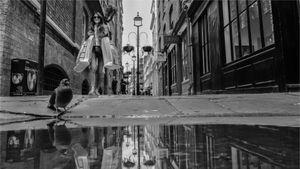 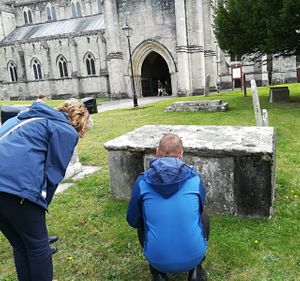 A history of Christchurch in seven strolls - Stroll 5: The Castle and Norman House