Most of us have learned something new during lockdown. I have learned more than I ever thought that I'd know about teddy bears! Bill Simpson, an amazing teddy bear collector, left his collection of over 250 bears to us in his will, along with some money to care for and display them. Thus, I have been finding out more about the history of teddies to create our new teddy bear museum at Milestones Museum.

To understand the history of teddy bears we have to go back to 1900s America. Teddy Roosevelt was president, and he was a great outdoorsman, conservationist and hunter, instrumental in setting up the National Parks system in America. In 1902, he was invited on a bear hunt by the governor of Mississippi. Having hunted all day, Roosevelt had not found a bear. Feeling bad about this, the governor’s men caught a bear and tied it to a tree for him to shoot. Roosevelt refused to kill the tied and helpless bear and so a legend began.

Clifford Berryman, a political cartoonist,, drew a cartoon of Roosevelt refusing to shoot the bear, which became very popular. The cartoon was seen by shop owner Morris Michtom. He and his wife made a stuffed toy bear and wrote to the president for permission to call it a 'Teddy Bear', which he granted. By 1903, the toy bear started to sell well. At the same time in Germany, Richard Steiff had been sketching bears in the zoo and had the idea to produce a toy bear in the family toy factory. By 1904, this bear had been imported to America and became known as a teddy bear due to the popularity of Michtom’s bears. Stieff went on to become, perhaps the most famous maker of high quality "Teddy Bears".

The materials that teddy bears are made from have changed over the years. Early bears were stuffed with wood shavings, called wood wool. This lead to quite a firm feeling bear, very different from the soft, comforting ones that we know today.

The modern, super safe teddy bear that we know today was first produced in Wales by Wendy Boston. In 1955, she produced the first teddy bear with safety eyes, which could not be pulled out and swallowed by children. They also had foam filling and acrylic fur, which meant that they could be washed. They even had specially strengthened ears, so they could be hung on the line to dry!

It has been really fun learning about teddy bears and the huge number of stories that they can tell. You can meet Bill’s bears in Mr Simpson’s Teddy Bear Museum in Milestones Museum, Basingstoke. During your visit you'll learn more about teddy history, meet Bill's favourite bears and find out about their adventures. You might even see a bear you recognise from your childhood! 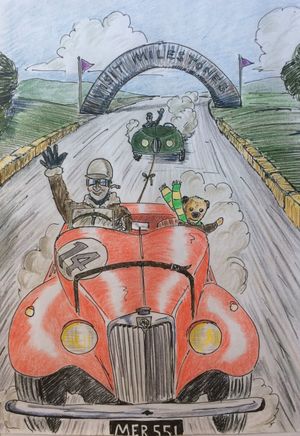 Local History Mystery: What stories can a teddy bear tell?