Within the Chilcomb archive in Winchester, the base of Hampshire Cultural Trust's central operations, there are several volumes of Morley Hewitt’s excavation diaries and photos of Rockbourne Roman Villa. Some of the photos were already scanned, but the majority are waiting to be digitised, like these images inside the first purpose-built museum in 1972, Visitor Services Assistant of Rockbourne Roman Villa, Wade Jones, found in the archive.

The collection team have kindly scanned these images for me to show what the museum looked like before our current displays were installed.  Since the 1980s, museums have focused on making history accessible, which meant the old-style cabinet to house the objects was replaced with our current thematic displays. We use selected objects in displays to represent a theme, such as how the villa farmed the land and how it looked.

Morley Hewitt’s excavation diaries are the most important collection of documents in the archive. Below is the first page from the 1940s - it states that the ferret and farmer origin story is true, but this happened in 1939. I did not know this; I previously thought the discovery was in the same year as the trial dig in 1942. What else could we find when we transcribe his diaries? The dates when each major object in the museum was found... or Morley Hewitt’s own thoughts day-by-day while the site was excavated?! Possibly in the future, we can look to transcribe these handwritten diaries!

These photos and diaries are crucial records that help us understand the Roman history of the villa. Whilst laying bare the foundations of the villa, the early excavators did not always record the exact nature of relationships and locations. Without recording the find’s context, vital information is lost and therefore very difficult to understand completely the development of the site. Morley Hewitt’s written records of where objects were found and his description of the site day-by-day are crucial information to explain how the villa changed through the Roman period.

The information we have on these years were greatly enriched by the 1983 report by Mr I P Horsey from the Royal Commission on Historic Monuments England (now Historic England), his detailed study of the evidence and excavation diaries provided a probable sequence.

These diaries give a fantastic insight into the day-to-day work of uncovering the Roman Villa. The star find in the archive was the history of another mosaic from the Western range dining room, now preserved underground.

Stephen R. Cosh is an archaeological writer and illustrator, specialising in the Roman period. He is the co-author of the four-volume corpus of Romano-British mosaics. This mosaic at Rockbourne is considered the 'worst' mosaic he painted. The quote below, from Current Archaeology, issue 157, explains:

"The mosaic I least enjoyed painting was the mosaic from the Rockbourne Roman Villa. It is the 'best' mosaic, in the triclinium, and it was surrounded by an elaborate 8-strand guilloche (rope pattern). Most guilloche is of 2 or 3 or 4 strands, so this was really rather special. However, in Roman times, it needed repairing and the poor craftsman who did it got totally confused. His strands go all over the place and it really is a mess. And I had to paint it exactly as he had done it, so I had to reproduce his mess. It was boring and difficult, because every tessera had to be placed individually. It was horrible, and the result is horrible, but that is as it survived."

Call to all former diggers!

We would very much like to hear from you and preserve your memories. In the archive, we sadly have no oral accounts of the digs, and without the enthusiasm and passion of the volunteer diggers, the story of Rockbourne is incomplete. Volunteers, then and now, are vital in the modern story of Rockbourne Roman Villa. I was fortunate enough to contact Sheila Fowler. Here are her memories from digging at Rockbourne and witnessing the discovery of the coin hoard in 1967:

“I worked at the Villa on most weekends and holidays from the early 60s until the early 70s. There was a regular team of us from many places, mainly Hampshire but there were two who came from London, Southampton and, of course, I came down from Birmingham. We all worked really well together while the site was being run by Morley Hewitt. In fact two pairs of us Mike and Maureen and Jack and myself, met there and eventually married.

By the time I joined the dig, much of the Northern area comprising the main dining room containing the geometric mosaic and the Western side containing the bath house and well had already been located. During my time, we concentrated mainly on opening up the already located Western area and extending it and locating and opening up the rooms on the Southern side.

At that time, we found several sections of mosaic floors and large quantities of broken pottery, which originated from many places, but the bulk was New Forest ware. The site was very rich in finds, mostly of little value, but nevertheless very interesting and which told us quite a lot about the people who had lived there.

One of the more exciting finds which came to light in August 1967, just outside of room L, was a large pot which contained nearly 8,000 coins all dating from 250AD to 280AD.

Our finds were always displayed in the museum to the delight of the many, many visitors we had whenever we were there and of course we left the site uncovered for most of the year, so that our visitors could see all of the fragments of mosaics, the Roman walls and of course the bath area.

My time at Rockbourne was a very happy one and writing this has brought back so many wonderful memories that I thank you for giving me this opportunity to re-live some of those.”

You are invited to join us for the Rockbourne Roman Villa anniversary event, Rockbourne Rediscovered, 6 - 7 August! 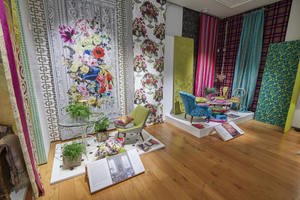 Out of the Blue: Our invigilators' favourites 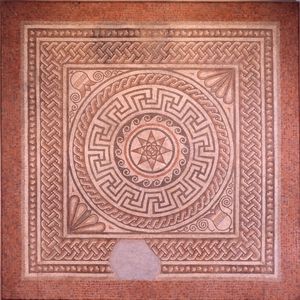