Two interesting and important artefacts have recently been found by metal detectorists in the Winchester area. Both items have been kindly offered to Hampshire Cultural Trust for accessioning into the Winchester archaeology collection.

The first item is a complete, early Medieval copper-alloy brooch which has been identified as 'hub-cap' type due to its shape. The brooch, measuring 20.6mm in diameter, has been dated to the 10th-11th centuries and is therefore another reminder of the area’s rich Anglo-Saxon history. The front has seven circular indentations arranged around a central raised collared setting for a dark blue cabochon (shaped and polished) stone, which may be glass or enamel. Traces of incised decoration remain around the rim, however corrosion has now made it almost indistinguishable. An unusual aspect of the brooch is the survival of the hinged pin loop and catch plate mechanism on the back, made of folded copper alloy sheet.

The second item is an incomplete Medieval lead alloy papal bulla of Pope Alexander III (AD 1159-1181). The obverse (front) depicts the faces of St Peter and St Paul flanking a cross, all surrounded by a beaded border. The now lost upper portion would have carried the inscription SPASPE (Sanctus Paulus, Sanctus Petrus). The reverse bears the legend ANDER/:PP. III within a beaded border. PP is an abbreviation of pastor pastorum (shepherd of the shepherds). The lost upper portion would have carried the start of Alexander’s name [ALEX].

Papal bullae were used as seals on official papal documents as a means of authentication. Following their use, they were often intentionally broken and then re-used as amulets or charms. This object was found close to the site of the St Mary Magdalen Leper Hospital in Winchester (founded by Bishop Toclyve around 1180). It is possible that it originates from a document relating to the foundation of that institution. A parallel institution, also called the St Mary Magdalen Leper Hospital, was founded in Southampton at the same time and is known to have been confirmed by Pope Alexander III in 1179 as one of the possessions of the Priory of St Denys. If this bulla does relate to the Winchester foundation, it may be evidence that both foundations were receiving similar documents from Pope Alexander III in 1179-1180. 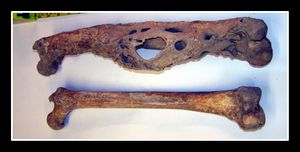 A bone to pick