We're finishing up Garden Wildlife Week and marking World Environment Day today by looking at the insect specimens in our natural sciences collections. Insects are an essential part of our ecosystem and with the specimens donated to Hampshire Cultural Trust, scientists and conservationists are able to study the natural world of the present day.

The stag beetle is probably the most majestic and largest beetle we will see in our gardens in the United Kingdom, but it is also sadly one of the most endangered. It is not widely seen across the whole of the country, but can be seen in the south east, including Hampshire. It is named after the male’s antler-like appendages, which are actually over-developed jaws. The male is 35-75mm in length and the female slightly smaller at 30-50mm.

You are most likely to see stag beetles at dusk during the summer when the males fly to find a mate. During the day they spend their time sunning themselves to conserve energy. The stag beetle spends three to seven years of its life in the ground as a larva. Even after they have changed into an adult, they still spend the winter underground before emerging around mid-May. The adult has a short existence and by August they will be dead, having reproduced and the females laid her eggs. While the larvae will eat rotting wood, the adult beetle cannot eat solid foods, although it can use its feathery tongue to drink sap and juice from fallen fruits.

The rose chafer can be distinguished by its metallic green body that shimmers in the light. Its natural habitat is grassland and along woodland edges and, as its name suggests, it does like roses! For this reason it is considered a pest by gardeners, as it will munch through rose flowers, particularly dog roses. The first few years of the rose chafer’s life are spent as a larva, eating decomposing vegetation, and although they pupate in the autumn, it is not until spring time that the adult beetle emerges from the ground. They can be spotted during the summer and autumn, feeding on flowers in the sunny weather. 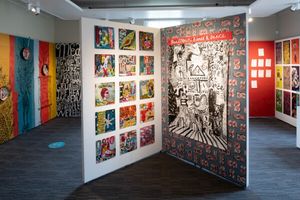 And now for something totally different…Welcome to Darktown!