In this week's Tino's Tale, Tino goes racing with Bill and learns that winning isn’t always the most important thing in a race. Read about Tino's adventures behind the wheel, then colour in our fun Racing Bear activity sheet!

‘Weeeeeeeee!’ squealed Tino in delight as the racing car whizzed around the corner. The wind roared through his ears and Tino wrapped his green and yellow striped scarf more closely around his neck. The trees rushed past as the car picked up speed along the final straight and Tino could see Rupert, Roberta and Tilly up ahead at the finish line, cheering and shouting.

As Bill made a flying finish across the line, Roberta and Tilly threw their hats in the air and Tino waved at them from the passenger seat.

‘And the winners are… Bill Simpson and Tino!’ called the race commentator, the black and white chequered flag waving cheerily as they passed it in first place.

‘What an amazing feeling it is to win the race!’ Tino laughed to Bill as they climbed out of the car. ‘I can’t wait for next time.’

The following week, Bill and Tino were back at the starting line of the race track, engine revving, Tino hoping for another win.

‘GO!’ The cars sped away from the line, with Bill and Tino’s red car among the leaders. Tino‘s excitement grew as they pulled ahead of one car, then another, then a third – they were nearly in the lead! Only one more car was in front of them. Bill waited for a straight to overtake.

‘We’re nearly in first place!’ Tino cried as Bill pulled out to pass the leading car.

Then, PPFFFFFFTTTTTTT. The car in front of them made a loud noise, blew out smoke and came to a stop.

‘What are you doing?’ Tino asked Bill in confusion, as Bill slowed their car to a stop too. ‘We’re in first place and could win this race if we keep driving.’

Tino watched as Bill leapt out of the car, went to the back and opened the boot. From the boot, Bill pulled out what looked like an enormous coiled snake. He attached one end to the back of their car and the other to the front of the broken down car. It was a tow rope!

As the other cars whizzed past the chequered flag to finish the race, Bill and Tino drove slowly in last place, pulling the broken down car and its driver behind them. The crowd went wild, the cheering and clapping far louder for them this time than it had been when they won last week!

The racing bear smiled and waved to the crowd and the rescued driver shook Tino’s paw in thanks. Tino grinned at Bill, who winked back. This was better than winning!

Bill and Tino are in their racing car - colour them in! 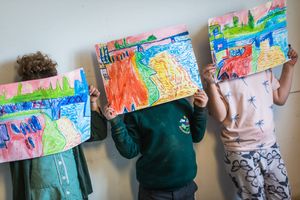 A Family of Creativity: Art 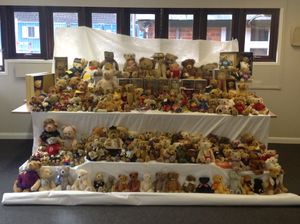