As the exhibition of William Heath Robinson’s work at The Willis Museum in Basingstoke enters its final few weeks, we've been delighted to bring together all the aspects of his work and draw a spotlight on this much-loved artist.

In these last Culture on Call posts on the exhibition, we focus on two areas of Robinson’s work which have been surprisingly overlooked. His successful humorous work took centre stage for most of his life; however, Robinson’s illustrations and watercolours give us a unique insight into the skill and originality of an accomplished artist, evident in his sensitive handling of subject, colour and form.

After leaving art school just before the turn of the 20th century, Heath Robinson joined his brothers Tom and Charles as an illustrator, starting in a small room off his father’s studio. After some initial difficulty, he managed to sell several drawings for publication in children’s magazines. His career rapidly blossomed and by 1900, when he illustrated The Poems of Edgar Allen Poe for George Bell, he had, according to The Studio magazine, established himself as a ‘worthy disciple of the modern school of penmen.’

From 1906 to 1916, Heath Robinson successfully combined the careers of comic artist and serious illustrator, producing what was to be his best work in both fields. Robinson’s illustrations for Shakespeare’s Twelfth Night in 1908 demonstrate his ambition to convey the ambience of the play, rather than to provide a literal record of its action. Many of the illustrations retain a theatrical atmosphere, playing with light on the facades of renaissance buildings, or adopting a high viewpoint much as a theatre goer would experience seated in the upper circle. The soft colour palette and effects of light not only add drama to the scenes, but help to transport the viewer to the past at the time of the play’s setting.

In 1910, Robinson started his own picture book for children. Inspired by his young family, the story of Bill the Minder delightfully describes a hero child-minder whose fantastical adventures see him journeying with a group of children to restore the elderly King of Troy to his rightful throne. Through a series of escapades, they meet some disenchanted characters, often the substance of some of Robinson’s wittiest drawings, but beautifully realised in both text and illustration.

This period of Robinson’s career saw the age of the gift book, with its sumptuous binding and tipped-in coloured plates. His contributions to the genre not only included editions of Shakespeare’s plays, but also Kipling’s poetry and Hans Andersen’s and Perrault’s fairy tales. His black and white illustrations to A Midsummer Night’s Dream rank amongst the finest produced for any book in the 20th century. What is clear in every set of illustrations for each new publication is how attentively Robinson reflects the characters and context to convey each tale with distinctly individual consideration.

Next week, Culture on Call will offer a final focus on Robinson’s watercolours, but if you want to see more of his illustrations we encourage you to visit The Art of W. Heath Robinson, open until 30 January 2022 at The Willis Museum in Basingstoke. 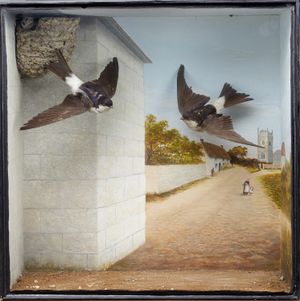