2020 marked the 400th anniversary of the voyage to America of the Mayflower and the settlement of Plymouth Colony in 1620: it is considered to be one of the most significant events in the story of modern America. Here, we look at how 17th century pottery from Hampshire helped re-write the history of the early English colonies in America.

Archaeological excavations on the colony have uncovered a settlement that looks similar to a typical 17th century English village. The most common type of object found is pottery, including Border Ware, from the kilns of the Hampshire/Surrey border.

Objects in the collections cared for by Hampshire Cultural Trust, including Border Ware pottery, mirror the type of artefacts found in these excavations. They help tell the story of how the early colonists carried a cultural life support system with them on their journey, objects that reveal as much about their ties to the Old World as their struggles in adapting to the New.

Pots from the kilns of Farnborough and Hawley crossed the Atlantic in the personal possessions of the colonists and also formed the basis of a thriving trade throughout the 17th century. Yet these pots were more than just functional objects. Their familiarity and daily use was a source of comfort in a strange and unforgiving land.

The native inhabitants of the region around Plymouth Colony were the various tribes of the Wampanoag people, who had lived there for some 10,000 years before the Europeans arrived.

Recent excavations on the colony have revolutionised our understanding of the early history of the settlement and its interaction with local people.

Finds of Border Ware pottery in particular allowed archaeologists to date the adjacent Wampanoag village to the 1620s, contemporary with the construction of the houses in the colony. This is earlier than originally thought and suggests a level of co-existence essential to the survival of the settlement in its early days.

This success would lead to the expansion of colonial America, resulting in a revolution that gave birth to institutions and form of government that survive in America to this day. 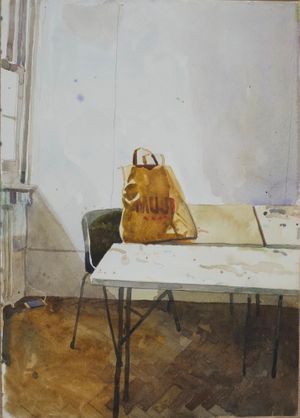