Oceanus: a mysterious find from Hampshire

As part of the Festival of Archaeology series on Culture on Call, Finds Liaison Officer, Simon Maslin introduces a Roman object featuring the Titan Oceanus, found in Old Basing in Hampshire.

One of the most spectacular archaeological finds from Hampshire in recent years has been a Roman object, of uncertain function, found in the Old Basing area by metal detectorists in the summer of 2020. It features a finely moulded copper alloy mask of a bearded deity, identifiable as the titan Oceanus, who stares out from a mass of hair, seaweed fronds and marine creatures. The mask plaque is mounted on a rectangular copper alloy plate which is decorated with vine leaf decoration, picked out in silver and which has an iron fitting on the reverse. Found with it was a single bent copper alloy bracket which clearly fitted to one end.

The object could be part of the framework or locking mechanism from an item of furniture or a chest – however there really are no close parallels to draw upon and its function remains uncertain. What is clear is that depictions of gods as well executed as this one are rare things in Britain, so this was clearly a high status and expensive item. Following its discovery, the detectorists alerted the local Finds Liaison Officer with Hampshire Cultural Trust and the find was properly recorded with the Portable Antiquities Scheme (recorded as SUR-77CBD4on www.finds.org.uk).

An archaeological investigation was quickly launched with the aid of Professor Mike Fulford of the University of Reading. This determined that the object had been buried beneath a cobbled floor surface, either inside or outside a building. This surface also covered a pit containing a cattle skull and was itself sealed by occupation deposits and pottery dating to the early 2nd century AD. The only other contemporary find was a single heavily worn silver denarius of Vespasian (AD 69-79).

The site itself is in the vicinity of a suspected contemporary villa and mill, perhaps part of a rural estate in the hinterland of the major Roman city at Silchester (Calleva Atrebatum). The deliberate dislocation and burial of this image of Oceanus suggests that we are seeing the outcome of a reverential act, perhaps intended to invoke protection or benediction from this personification of the sea on the part of an individual, or as part of the wider cycle of activities and beliefs in this community.

The find was retained by the landowner after its discovery, which fortunately saved it from private sale and enabled it to be acquired by the British Museum. It is currently undergoing conservation and analysis and will hopefully end up on public display. 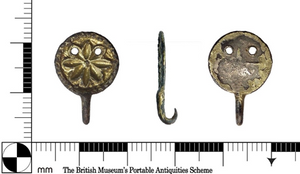