Jane Austen 200: Celebrating Jane and her life and legacy in Hampshire

Jane Austen, one of the world’s most famous authors, spent most of her life in the historic and beautiful county of Hampshire. Its houses, countryside and people provided the inspiration for many of her novels.

2017 marked the 200th anniversary of Jane Austen’s death, and Hampshire Cultural Trust came together with Jane Austen’s House Museum and many other partners across the county to celebrate Jane’s creativity and talent.

The year was packed with a collaborative programme of exhibitions, talks, walks, writing competitions and performances, press coverage of which ranged from local to international news.

Hampshire was not only the birthplace of Jane Austen, but its people and the society in which she moved, provided inspiration for many of her novels, classics as Pride and Prejudice, Emma, Mansfield Park and Sense and Sensibility.

Known for proudly reminding people that she was “a Hampshire born Austen”, Jane was finally laid to rest in Winchester Cathedral, in 1817 — at the age of just 41.

Jane was born on 16 December 1775 at the village of Steventon in North Hampshire where her father was the vicar of the small 12th century church, Steventon Rectory is where Jane spent the first 25 years of her life.

In 1805 Jane’s father sadly passed away and Jane, her mother and sister Cassandra moved to Southampton. Jane found living in a city challenging after growing up in the countryside but she often spent time walking along Southampton city walls and taking excursions to Netley Abbey and the River Itchen. It’s also believed that whilst Jane was living in Southampton she travelled up Beaulieu River, passing Buckler’s Hard and Beaulieu Abbey in the now New Forest National Park and also danced in Southampton’s Dolphin Hotel.

Jane also often travelled to Portsmouth to visit her brothers, Francis and Charles, who were stationed there with the Royal Navy.

“Surprises are foolish things. The pleasure is not enhanced and the inconvenience is often considerable” — Emma

From 1809 until 1817 Jane lived in the beautiful village of Chawton near Alton where her brother Edward owned Chawton House. Jane’s brother offered Jane, Cassandra and their mother a house in Chawton Village, which is now known as Jane Austen’s House Museum. Back in the countryside Jane turned again to writing and produced her greatest works, plus revising previous drafts of Mansfield Park, Emma, and Persuasion.

In 1817 Jane became ill and moved to a house in College Street, Winchester with her sister to be closer to her doctor. Sadly after a couple of weeks at the age of 41, she passed away on the 18th July 1817.

A few days later she was laid to rest in Winchester Cathedral.

“I declare after all there is no enjoyment like reading! How much sooner one tires of anything than of a book! When I have a house of my own, I shall be miserable if I have not an excellent library.” — Pride and Prejudice

In the footsteps of Jane Austen in Hampshire

While literary pilgrims from all corners of the globe know where to come in search of “Jane Austen Country”, visitors to Hampshire these days find it very easy to follow in the footsteps of the author who brought us the likes of Pride and Prejudice, Northanger Abbey and Sense and Sensibility.

A good starting place is Jane Austen’s House Museum in the quiet village of Chawton. It was here that Austen wrote and revised six of her most famous novels — four of which were subsequently published while she was living in this house.

This was Austen’s last home, where she lived with her mother and her sister Cassandra from 1809 to 1817 — and where the hairs will rise on the back of your neck when you see the little table where she revised her manuscripts for Sense and Sensibility, Pride and Prejudice and Northanger Abbey, and wrote Mansfield Park, Emma and Persuasion.

With the possible exception of Steventon — where she was born and grew up — Chawton was the place where Austen found most peace and security. Today, Jane Austen’s House Museum and gardens retain much of that same atmosphere; and it the ideal starting point for anyone wanting to find out more about Jane Austen and her books, as well as her family and the life-and-times in which she lived.

Visit it on a sunny day, and the sunshine streams through the windows at the front of a house widely regarded as Austen’s literary home.

Elsewhere in the village Chawton House Library (above) has become an internationally respected research and learning centre for the study of early women’s writing from 1600 to 1830. Set in the manor house that once belonged to Austen’s brother, Edward, the library, house and gardens are also open to the general public.

“Facts or opinions which are to pass through the hands of so many, to be misconceived by folly in one, and ignorance in another, can hardly have much truth left”— Persuasion

Steventon is another destination on a tour of ‘Jane Austen Country’. Jane herself was born on December 16th 1775 in the Old Rectory that sadly, no longer exists. It is where she lived the first 25 years of her life, and where she created first drafts of three of her published books.

Today, a giant lime tree planted by Austen’s brother, James, is all that remains in the spot where the rectory once stood. But St Nicholas Church (left), which Jane attended regularly with the rest of the family to listen to their father preach, is where visitors will find a bronze plaque dedicated to her memory. Having collected sufficient inspiration from the people she had met and the places she had been to begin her writing, Jane’s life was interrupted when the family moved to Bath following the retirement of her father.

On her return to her beloved Hampshire countryside — first to Southampton, and later to Chawton — Austen picked-up her quill pen once again. And the rest is history. Sadly, illness started to shape her life in her final years, but she recovered sufficiently to revise and complete Persuasion, which would be later published posthumously along with Northanger Abbey.

After starting her seventh (unfinished) novel — Sanditon — her health once again started to fail, and she agreed to being moved to Winchester under the care of Giles Lyford, a surgeon at the County Hospital.

Lodgings were arranged for her and Cassandra there at 8 College Street in Winchester but she died on Friday 18th July 1817.

She was buried in the north aisle of Winchester Cathedral.

While the inscription on her tomb makes no reference of her literary talent, a brass tablet was added at a later date confirming that she was “known to many by her writings”.

Cooking on a Ration 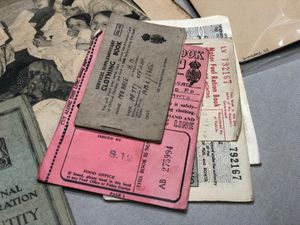 Short but not so sweet: food rationing during World War II