As part of the Council for British Archaeology's Festival of Archaeology 2020, Hampshire Cultural Trust's Assistant Wardrobe Supervisor, Alex Walker, discusses the fieldwork fashion of archaeologists since the 17th century.

When you think of an archaeologist, you may think of the objects they find or the tools they use, but perhaps not what they wear. The clothing worn by archaeologists over time can show us how the profession has developed from intrigued antiquarian to trained individual.

An antiquarian, John Aubrey was responsible for the discovery of the stone circle at Avebury and completed the first plan of Stonehenge. For over 30 years, he wandered the countryside from Cornwall to the Orkneys documenting stone circles, which he believed to be Druid temples. Not the most practical attire, but very typical of the late Stuart period, Aubrey would not have looked out of place roaming the countryside in his lace jabot, silk doublet and periwig!

Most famous for the discovery of Tutankhamun’s tomb in the Valley of the Kings in 1922, Howard Carter dressed smartly, complete with bow tie and waistcoat - even on site. Typical of the time, Carter would oversee his team of Egyptian workers as they searched the ground for King Tut, so didn’t need practical clothing. His smart attire didn’t stop him from removing his jacket to jump in the trench, exploring the tomb with Lord Carnarvon and exclaiming he could see “wonderful things”.

More eccentric than practical, Osbert Guy Stanhope Crawford could be seen riding round the countryside on his trusty bike wearing his flying cap and goggles, trousers tucked into his socks, mapping archaeological sites for the Ordnance Survey. A pioneer of aerial photography in archaeology, Crawford served with the Royal Flying Corps in World War I mapping the trenches, which was where he realised the potential of spotting archaeological sites from the air.

Famous for his brightly-striped jumpers, Mick Aston is probably most well-known for the television show Time Team, which he co-created with television producer Tim Taylor. Throughout his career, Aston worked hard to share archaeology with the public through Time Team as well as lecturing in archaeology at several universities. He didn’t think he would ever leave a legacy behind, however, various archaeologists have stated that Aston had a major impact in helping popularise the discipline of archaeology with the British public.

From Aubrey to Aston, you can see how, as archaeology developed, the need for practical clothing has changed. But this doesn’t mean boring, as Mick’s jumpers demonstrate!

If you’ve been inspired by this foray into archaeologists’ clothing, Hampshire Wardrobe has all you need, to recreate these iconic looks. 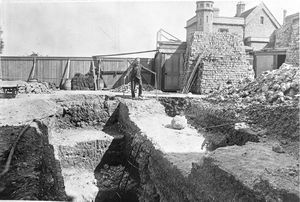