It's your last chance to see the Dinosaurium exhibition at Westbury Manor Museum in Fareham. The exhibition is open until Saturday 10 October and looks at the long history of our relationship with dinosaurs; from remains found in the Gobi desert that gave birth to a mythical winged beast, to the creatures brought to life in Jurassic Park.

Here we give an insight into the exhibition and discuss how dinosaurs were presented in popular culture and how they have been consistently ‘re-imagined’ over the years and the collector craze of the 18th century.

Every image of a dinosaur you have ever seen, on film, TV, in books or exhibitions has, at least in part, been a work of the imagination. Since the first dinosaurs were identified there has been a desire to put flesh on the bones and a glint in the eye of these amazing animals.

In 1922, an American expedition to Mongolia discovered the fossilised bones of a new dinosaur lying exposed in the red sands of the Gobi desert. This was Protoceratops, a frilled, beaked dinosaur dating from 70 million years ago.

On a medieval tile in the collections cared for by Hampshire Cultural Trust, is an image of a creature that may have been inspired by this dinosaur, the griffin. This mythical beast, with a sharp beak, claws, four legs and large ears or wings, has been around for over 5,000 years, from the palaces of ancient Iran to the films of Harry Potter.

One theory suggests that tales of the fossil remains of Protoceratops traveled along the early trade routes from Central Asia and inspired depictions of the griffin which emerged in the ancient civilisations of the Middle East. If correct, this would make the griffin the first re-imagined dinosaur.

The craze for collecting emerged from the enlightenment of the 18th century. Aristocratic families returning with souvenirs from the Grand Tour amassed huge and varied collections of 'curiosities'. By the 19th century, the collecting bug had been taken up by the professional classes and the popular image of the country cleric spending his leisure hours wielding a butterfly net was born.

These collectors were often polymaths whose interests ranged from archaeology to geology, natural history to palaeontology. This was the golden age of the amateur scientist whose careful observations and cataloging of the world around them laid the foundations of modern scientific inquiry.

For some, it was an enthusiasm born out of necessity. Mary Anning (1799 – 1847) was from a poor Dorset family and started by collecting and cleaning fossils which she and her brother sold from a stall on the seafront in Lyme Regis. Among her many discoveries were Ichthyosaurs, a skeleton of Plesiosaurus and the first identified British Pterosaur leading to her recognition as one of the foremost Palaeontologists of her day.

Although dinosaur fossils may have stimulated our imaginations for thousands of years, their scientific study began with what is thought to be the first written description of a dinosaur, a Megalosaurus, by William Buckland in 1824. In 1854 the first life size reconstructions of dinosaurs appeared at Crystal Palace and influenced our perception of them as slow lumbering lizards for the next 100 years.

Early film makers exploited the popular fascination with dinosaurs. The lovable animated Gertie the Dinosaur appeared in cinemas in 1914. That same year they were shown chasing cavemen in D. W. Griffiths film Brute Force. Their image in public imagination as huge scary monsters was sealed and the myth that dinosaurs and humans co-existed was born.

With his revolutionary stop-motion techniques Willis O'Brien went on to bring dinosaurs to life in the 1933 film King Kong. Today Computer Generated Imagery (CGI) combined with the latest scientific discoveries, help bring our world and theirs ever closer. But whether on canvas or screen, science can only take us so far, breathing life into these fascinating creatures still requires a leap of the imagination. 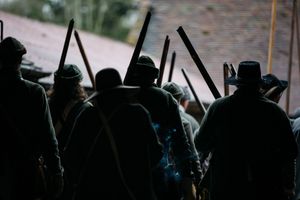 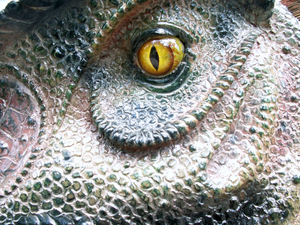