Part five of a nine part series of articles from Mark Barden, our Community Cultural Experience Manager here at Hampshire Cultural Trust, 'digging the dirt' on all things archaeology.

‘Finds’, objects such as ceramics, bone and metalwork, are removed from the layer or feature as it is excavated and placed in a tray or bag labelled with the number, the ‘context’, for that particular layer, a floor or yard, or feature, such as a pit or post-hole.

Some objects, predominantly metalwork, are classified as ‘small finds’ and may be recorded and ‘bagged’ separately. Unlike bulk finds, such as pottery, brick and tile, these objects will be processed, recorded and archived individually for research, publication and possibly public display.

While the bulk finds may be washed and left to air dry, then bagged and boxed up on site other finds, organic material, such as wood or leather, and metalwork are treated differently.

Some of this material may be so fragile it will need conservation in the ground before it is excavated. Occasionally an entire block of soil containing an object may be removed from site and ‘excavated’ under more controlled conditions in a conservation lab.

Some objects are too small for archaeologists to spot whilst excavating, but can be retrieved by taking soil samples. The samples are sieved and their contents recorded in the laboratory. Organic material retrieved from sieving, such as beetles and snails, tell us about the kind of environment that people lived in. Seeds, pips and fish bones identify the crops they grew and the food they ate. This material can also identify the time of year an activity was taking place.

Most excavated objects had either been lost or thrown away and are often fragmentary. While they provide important information about a sites date and function they rarely allow for a direct connection to an individual. The exception to this are burials.

Prior to the Christian era it was customary to bury individuals with personal items as an act of devotion or for use in the afterlife. Whether deposited with a body or a cremation, these objects were often complete and buried with care. They may have been further protected by a coffin, how well they survived would then depend on the type of soil they were buried in.

From a scarab amulet in the wrappings of an Egyptian mummy to a brooch in a pagan Anglo-Saxon burial these are the objects that give us our closest connection to lives lived in the past. 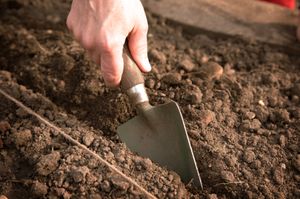