A story of collaborations, from the Friends of the Willis Museum

John Hollands, museum volunteer and member of the Friends of the Willis Museum shares a local heritage story of collaboration between the Friends and the Morris Singer Foundry, focusing on a unique piece of sculpture in Basingstoke.

The Basingstoke Triumphal Gateway is a striking public artwork at the end of London Street in Basingstoke. Commissioned by Basingstoke and Deane Borough Council and erected in 1992, it was designed by artist blacksmith, Peter Parkinson, with steelwork by his colleague, Richard Quinnell. Fastened to the Gateway are 16 bronze panels, each illustrating aspects of Basingstoke’s history and culture. The panels were cast at the town's Morris Singer Foundry, which has since moved to Lasham. The foundry’s main business is producing castings for sculptors and it has worked for famous names such as Barbara Hepworth and Henry Moore. Sculptures, statues and monuments it has cast can be seen all over the world.

In 2012, the Friends of the Willis Museum was invited by Basingstoke and Deane Borough Council to bid for a grant towards a heritage project. The Friends successfully bid for funding to produce a book about the Gateway. Peter Parkinson and Richard Quinnell were contacted and both helped a great deal by providing information about the design and construction of the artwork. A letter published in the Basingstoke Gazette asking if any past or present Morris Singer workers could get in touch and help brought an encouraging number of responses, including one from David Vallance, who had been the works manager/managing director of the foundry during its 32 years in Basingstoke.

With David's help, the Friends were able to produce a definitive account of the making of the Gateway as part one of their book. Part two was about the 16 bronze panels and for this most of the research centred on the Willis’ archives collection. The opportunity was taken to make references to many of the museum’s exhibits, as well as exhibits at Milestones Museum and Basing House. The council grant paid for an initial printing of 150 copies in 2013.  A copy was given to every school in the town and the rest were sold in the Willis Museum shop.

By this time, the Friends were sure that the foundry and its history would make an excellent subject for a special exhibition in the Willis Museum's Basingstoke Gallery and David Vallance and other foundry workers were keen to assist. The outcome was a very successful exhibition in 2014, covering foundry processes, famous sculptors the company had worked with and the company’s long history: the company was in Basingstoke for 32 years, before that in London and before London in Frome, Somerset, where it was founded by John Webb Singer in the mid 19th century. An interesting range of artefacts and archive material was displayed, a retired foundry worker loaned a short video of scenes at the Basingstoke foundry, the Basingstoke Archaeological and Historical Society recorded interviews with foundry workers past and present and a small team of Friends created display panels to fill the wall space.

The exhibition was subsequently shown at the Hampshire Record Office and the display panels were saved and have recently gone on permanent loan to Morris Singer.

A history of the company up to the early days at Basingstoke already existed and David Vallance wanted to continue the story with his own, first-person account of his Basingstoke years, plus a little about Lasham. The resulting book, 50 Years of Founding at The Morris Singer Foundry Ltd., Basingstoke is a joint effort by David and John Hollands from the Friends team. It gave John some fascinating insights into the world of sculpture founding, not least how Morris Singer produced the huge reproductions of Saddam Hussein’s hands, which held up arches of swords in Baghdad, and how the company had acquired a wax impression of Saddam’s thumbprint, used to identify him after his capture. Among the many other sculptures mentioned are bronze doors for Washington Cathedral, reproductions of ancient bronzes that never leave Beijing’s forbidden city and an Elizabeth Frink in Basingstoke’s All Saints Church.

In 2020, copies of the book were printed for general sale and are now available to purchase from the Willis Museum in Basingstoke and the Curtis Museum in Alton. 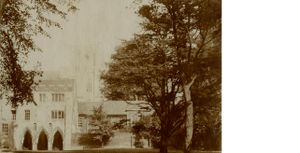 A Hundred Years of Winchester 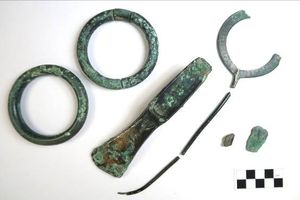