At Aldershot Military Museum, we hold a large collection of objects, some of which tell specific stories of individual service. This large Union Flag dating from the early 20th century was used within the garrison at Aldershot at the start of the First World War. The flag was taken by a Canadian soldier whilst training here at Aldershot prior to deployment to the battlefields of the Western Front and specifically the trenches of Ypres.

The Canadian forces were posted to the Ypres Salient, a network of shallow trenches surrounded on three sides by German forces. It was here that the first gas attack of the First World War took place, opening a hole in the defences of the salient, with a second gas attack two days later. Following both gas attacks, the German forces launched assaults on the trenches and the Canadians, along with their French-Algerian allies, managed to hold the line.

At some point during this four-day period, the soldier who had taken the flag was injured and a comrade draped the stolen flag over him. He was transferred to a military hospital where he later died of his wounds. The flag, stained with the blood of the fallen man, was taken by a second Canadian soldier who held it until 1984.

The flag formed a part of the Remembrance parades in the hometown of the Canadian soldier for many years, until in 2003, it was returned to Aldershot by a member of the family of that second Canadian soldier.

Many of the objects in our collection hold personal stories like this but this flag holds a particularly powerful story that resonates through time. It reminds me of the men and women who passed and still pass through the garrison. We are a small part of the story of Aldershot but we hold much of the memory of the place, and particularly the story of all those who left never to return. It reminds me that our community is not just a local one but the entire military family of the Commonwealth and of all the soldiers and their families who are connected in some way to us through the history that we hold. 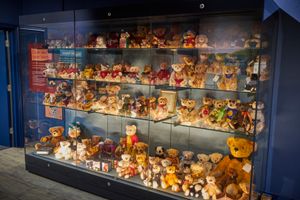 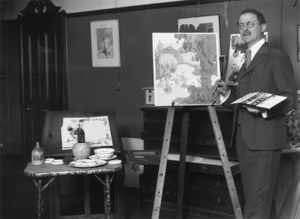