Milestones Museum was officially opened 20 years ago on 1 December 2000 by HRH The Duke of Edinburgh. Basingstoke’s museum of living history was a joint project between Hampshire County Council and Basingstoke and Deane Borough Council, with major funding from the Heritage Lottery Fund.

The story of Milestones Museum began in 1968, when Hampshire County Council became involved in saving the Taskers collection from being dispersed when the Andover based engineering firm was put up for sale. Over the years, the collection grew and by the early 1990s, it had expanded to include vehicles and items relating to other major local manufacturers such as Thornycroft and Wallis and Steevens, amongst others.

In 1994, Hampshire County Council and Basingstoke and Deane Borough Council agreed to go into partnership to build a new museum on Basingstoke Leisure Park to house this growing historic vehicle collection. After an application to the Heritage Lottery Fund Millennium Project, which was hand delivered to their offices in London, and following a whole year of negotiations, the project was awarded £6 million. The museum’s working title was the Hampshire Technology and Transport Museum, but in 1997, following a competition in the Basingstoke Gazette, the name Milestones Museum was officially adopted.

In March 1997, planning permission was granted and an appeal for old bricks, tiles and cobbles to build the museum’s streets was put out. In January 1998, construction began and, 11 months later, the exterior construction was finished with the completion of the roof in December 1998.

Work then got underway in the museum’s interior, with staff from Hampshire Museum Service not only putting thousands of objects on display, but also working alongside external contractors to construct the scores of shop fronts and sash windows, granite pavements and cobbles, and even laying tramlines in the streets.

Opening at the Willis Museum in September 1999, and subsequently going on display in venues in both Andover and Alton, the Making Milestones exhibition explored the history of the project, with photographs of both the plans and the building process on public display.

Milestones opened to the public on 25 November and was officially opened by The Duke of Edinburgh a few days later on 1 December. A large number of guests attended the opening, including staff, volunteers and the Mayor of Basingstoke, giving The Duke of Edinburgh the opportunity to meet the team who created the museum. Following a tour of the new museum’s streets, the opening itself took place at the Agricultural Showground in the heart of Milestones. As he opened the smoke box door at the front of a Taskers portable engine, adapted to reveal a plaque commemorating the day, The Duke of Edinburgh jokingly remarked that ‘one museum exhibit was opening another’.

Twenty years on, Milestones Museum, operated by Hampshire Cultural Trust since 2014, is firmly established as one of the county’s top attractions, with visitors from all over the UK and beyond stepping through its doors to experience life in Hampshire past.

With thanks to Hampshire Cultural Trust Exhibition Designer,  Mark Fenton. 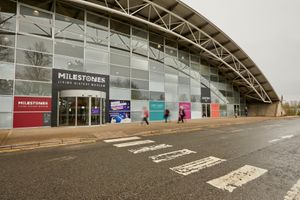 Your memories of Milestones