Part 5: Freedoms of the Borough

The final civic acts of thanksgiving were presentations of the Freedom of the Borough, the first of which was on 11 September to the Hampshire Regiment. Four hundred men of the Regiment were on parade, representing 7 battalions, each with their colours. At the formal ceremony, the Mayor presented the Colonel of the Regiment, General Sir George Jeffreys, a silver casket containing the parchment Freedom scroll. The regiment marched through the town with colours flying and bayonets fixed, as was now its right, led by the mascot 'Fritz', a St Bernard dog who had been rescued by members of the regiment during their attack on Arromaches in 1944.

On 26 September, the Freedom of Aldershot was conferred on the Canadian Army Overseas, the first occasion that such an honour was given to an overseas army. The ceremony followed a similar format to that for the Hampshire Regiment, the main difference being in the scale of the event, for nearly 10,000 Canadian troops attended the parade at the Recreation Ground. The Freedom was received by Lieutenant‑General P J Montague of the Canadian Military Headquarters and the ceremony concluded with the playing of the Canadian national anthem. The Canadians followed tradition by then parading through the town with drums beating, colours flying and bayonets fixed. In the evening the focus turned to the Maida Gymnasium, where the Canadians and the 'Lads of the Village' jointly organised a Victory Ball for charity. Canadian Army bands played for some 1,300 guests who danced into the early hours.

The last Freedom presentation did not take place until 1948, although it had been agreed by the borough in 1944. The ceremony was eventually held on 6 July 1948 at a lunch at the Dorchester Hotel in London, attended by 400 Aldershot people representing both the military and civilian parts of the town.

Aldershot, the Home of the British Army and also the home of the Canadian Army Overseas during the Second World War, had known its share of grief and suffering. Although not as badly bombed as some towns, because the town was so closely intertwined with the Army the citizens felt keenly their anxiety for the safe return of the troops and sorrow over those who fell. In the 1945 celebrations was a mixture of joy at the final victory, relief that it was all over, and dignified remembrance for those who did not return. 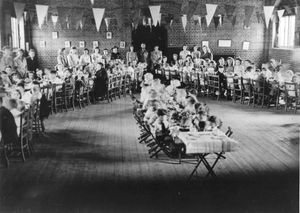 Flying the Flag for VE Day 75