Digging the Dirt: the what, whys and wherefores of excavating the past 1

Part one of a nine part series of articles from Mark Barden, our Community Cultural Experience Manager here at Hampshire Cultural Trust, 'digging the dirt' on all things archaeology.

Episode 1: Once upon a time…

Archaeology is the examination of human activity in the past, through the study of the material remains people left behind and the environments they lived in. This material could range from a 500,000 year old flint hand axe found in a gravel quarry, to the recovery of graffiti from an abandoned World War II air raid shelter.

Human beings have always had an interest in their past. For the earliest peoples knowing how their ancestors survived, where the best hunting grounds were, where to shelter in winter and where to find water in the severest droughts could make the difference between life and death.

As ancient civilisations emerged, this knowledge became power and was woven into tales of myth and magic, gods and monsters. Kings, queens and emperors used these stories to justify their right to rule and it was the quest by later historians to separate fact from fiction which led to the development of the forensic and increasingly science based discipline of archaeology.

Private individuals had been collecting high value antiquities since the late Middle Ages. By the 18th century some of these collectors, or antiquarians, began acquiring and cataloging more common, everyday items, as they realised how much these objects could teach us about the way people lived in the past. It was these collections that would later form the basis for many national museums, including the British Museum.

Until the 19th century 'archaeology' simply meant the study of 'ancient history', and was first used in its modern sense in 1837. The 19th century saw two developments that revolutionised our study of the past; the adoption of stratigraphy as an archaeological tool for interpreting successive periods of human activity and the idea of 'deep time', the realisation that the world was many millions of years older than originally thought.

By the late 1800s archaeology was established as a professional academic discipline, with pioneers such as Flinders Petrie working on the Great Pyramid in Egypt, Sir Arthur Evans' excavations at Knossos in Crete and Howard Carter's work in the Valley of the Kings, overseeing a golden age of discovery. 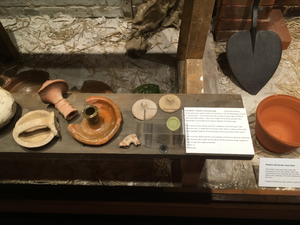