At The Gallery at The Arc, Winchester, Extraordinary Everyday: The Art & Design of Eric Ravilious features different artistic commemorations of the coronation of Queen Elizabeth II in 1953.

Wedgwood brought Eric Ravilious designs to life in Queen’s Ware earthenware, a type of high-quality plate cream ceramic with a brilliant glaze developed from creamware. Developed throughout the 18th century, this was Josiah’s English response to Chinese porcelain, which was highly desirable at the time. It was named in honour of Queen Charlotte, who ordered a cream table service from Wedgwood in 1762, and appointed Josiah as the queen’s potter. This creamware was particularly suitable for transfer-printing, as the neutral colour allowed for very detailed and elaborate designs to be easily admired. These became a cheaper alternative to hand-painted ceramics and became a popular staple amongst middle class families, both in England and America.

James Russell, curator of Extraordinary Everyday, describes Ravilious designs for Wedgwood’s Coronations Mugs as “joyful rather than formal. The jaunty lion and unicorn look, even in silhouette, as though they are about to cut a caper beneath the fireworks blazing overhead.” Here at The Gallery, we couldn’t agree more, and imagine how it would have been for interwar and post-war families in an everyday activity to come into contact with Ravilious’ world, in midst of a tea break - picking up the mug and join in merry celebrations with the lion and unicorn. Transfer-printed in black and enamelled in colours, the mug exhibits Ravilious’ preferences for hard lines and patterns and astute use of colours, as the fireworks’ movement and energy are picked out in yellow enamel. In the interior of the mug in black is the monogram “ER II”.

Among the design commissions, revised by Wedgwood after Ravilious’ death, we also find “Coronation Golden Persephone”, a dinnerware set made on Bone China. “Persephone” is a pattern designed by Ravilious in 1936, and was later reproduced in different colours including green, blue and most spectacularly, a gilded version, introduced to celebrate the coronation of Elizabeth II.

James Russell tells us that this “Coronation Golden Persepone” edition was “adapted for use at the Coronation Banquet given in June 1953 by Anthony Eden, the Secretary of State for Foreign Affairs.”  The “Persephone” pattern fused traditional influences and his own drawing, entitled “Harvest Festival and Loaves”, made in 1936, while the artist was working on the Country Life Cookery Book at the church in Castle Hedingham, Essex. This became the first full set of tableware bearing a Ravilious design.

Persephone is the ancient Greek queen of the underworld and her legend, as writer Joe Shute points out in Forecast: A Diary of the Lost Seasons, “marks one of the earliest human attempts to make sense of nature’s oscillation between death and rebirth.” As the daughter of Zeus and Demeter, she was given permission to return to the world after being kidnapped by Hades, the king of the underworld. The period in which she visited her family marked the arrival of summer, and her departure the onset of winter. The pattern features a central design of loaves, fruit, fishes and a flamboyant cornucopia within a scroll border.

Extraordinary Everyday is accompanied by a fully-illustrated catalogue written by the curator. The catalogue will be available to purchase from our shop and online. Save £2 when you purchase a ticket and exhibition catalogue.

There is a varied programme of accompanying events available for the exhibition, including lectures, tours and workshops – visit The Arc website to find out more and to book. 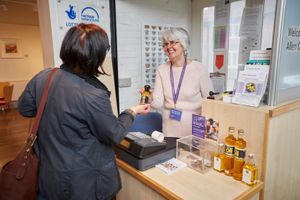